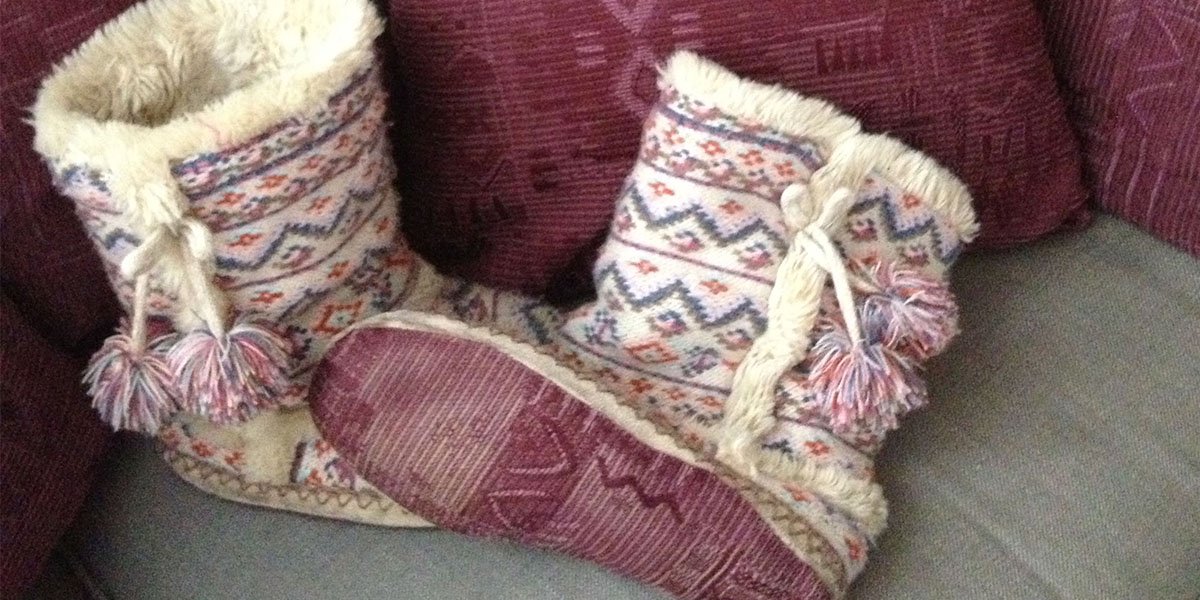 How our external world is so reflective of our internal world, our thoughts and our feelings.

This past month has found me with the incredible desire to make things, to be creative in some shape or form. So I started off with making new covers for all my cushions. Next came my slippers, yes, I could have gone out and bought new ones but I just love my slippers, they have kept me warm and cosy throughout the winter. I just needed new soles as they were fraying, had holes and just falling apart. Left over material from my cushions was just perfect for the job.

As to the soles, I feel that I have reconnected to my SOUL. It feels like I am saying hello to me, my soul.

Next came the knitting, I saw a lovely knitted jacket in our local wool shop window. I went in got the wool and the pattern. I started it almost straight away but after several inches of knitting the pattern didn’t look right, it didn’t feel right either. I rechecked the pattern and carried on, double checking every line of the pattern as I went on. In the end I stopped, it didn’t look right, it didn’t feel right, there was something wrong!! I went back later and then I saw it, I was reading one line of the pattern wrong. I did a few rows with this new insight and yes it was now right. I then had to undo all the work I had done and completely start afresh.

I was doing one stitch wrong on a particular row but it threw out the beautiful pattern, a tiny detail but the result was fragmented, jumbled and out of sync.

How often in our lives do we continue doing something when it doesn’t really feel right, it doesn’t quiet fit for a whole manner of reasons that we tell ourselves. Sorting things out early can save us a whole lot of time and energy; it can often be just a small thing.

We are a perfect blue print and we each have our own beautiful pattern of our true selves.

Just before getting the wool I drew a sketch of an item I wanted to make, I went straight out and bought the material. I now have to make a pattern and work out how to make it.

Whilst pondering this, it occurred to me that I was also working on another “how to do it”. I work with a healing system I call The Pointillist Technique. I just know how to do it but I am being guided to show others how to. I have to make a pattern, a format to this end.

I know that as I work with the material I will gain an insight and clarity with regards to The Points.

Our internal and external are so intrinsically one, part of the beautiful whole.

On Friday 17th May I was involved in a traffic accident. Isn’t it funny how you find out so many bits of information after an event? I now know that the M25 is one of the busiest motorways in the world and what it means to be Blind Sided.

It was just after 7 in the morning, I had just got onto the M25 and was in the inside lane, suddenly there was a loud bang as my car was hit in the side. I was pushed onto the grill of a very large lorry and being pushed side-ways along the motorway. I then flipped off the lorry into the fast lanes, spinning around like a Catherine Wheel and finally came to a stop. I didn’t hit the central crash barrier and not one car hit me or me them. It really was the most terrifying experience of my life.

I walked away with not a mark on me. The lorry driver was at fault and he even phoned me later in the day to check I was Ok; he was a really lovely guy. He didn’t see me; I was in his blind spot. I told him not to worry, we had both had a nasty shock but we were alright, and accidents can happen. One of the first things the AA vehicle recovery man said to me was “Someone up there was looking after you this morning and I should buy a lottery ticket”

I did buy a ticket but didn’t win the 53 Million; I won much more than that.

On Monday 20th May the mystery of the gurgling pipes in our house was revealed. For weeks I had heard it on odd occasions but no one else at home had. If I ever hear it again I know just where to look.

Removing the outside drain cover revealed a serious back up of sh*t. After much rodding and a few gut reflex actions the drain was unblocked and running free. After copious amounts of hot water I had the cleanest gully and sweetest smelling drains in town! The problem had been caused by a small piece of render from the side wall of the drain, falling into the gully.

Bank Holiday Monday (27th) I dealt with a boundary issue that had been irritating me for months and months. A neighbour’s hedge was protruding several feet from the boundary making access to our driveway more and more difficult. It irritated me but you get used to it, when we had visitors it was not an easy task for them, and the problem was right in your face.

I was going to knock on the door or talk to them when I saw them, opportunities came and went, but I did nothing. On the 27th I took the step and asked if the hedge could be cut back to the boundary as it was restricting our driveway. Within a couple of hours they had done the job, issue solved.

I felt so relieved and really happy within myself after I asked the question and on reflection realised that my “putting it off” was my fear of any confrontation and my own personal boundary issues. I can see so much in my life relating to this and will talk more about it later.

31st May, the month ends with two potential accidents, can you believe it!! and on my Birthday. The first one, I was driving, the second one I was a passenger. Firstly I swerved to avoid a car; he couldn’t have looked and didn’t see me. In the second one, the vehicle I was travelling in was over taking a car at the end of a dual carriage way going into a single lane. The boundary lines denoting this, which we had crossed, sent us out of control, a few seconds later we were back on track.

Allow yourself to be seen for who and what you truly are.

Clarify your boundaries as to what is and what is not acceptable to you.

So after this rather long first piece I now have the Facebook Page set up, with much needed help from Sarah. I have never looked at a face book page before; the whole social media has been a BIG no no for me but that little voice would not go away. As a friend said recently when I told her about this page, after she had finished laughing of course, “you and my 84 year old neighbour are the only people I know not on face book”.

So now I am LinkedIn, ready to twitter and face booked, I have jumped in with both feet and will learn as I go, just like life!

Remember “angels can fly because they take themselves lightly”